The stormy weather on February 25, 2017, didn’t keep any of the 300 guests from enjoying our signature fundraiser, the 12th Annual Hearts and Hammer Gala at the Meadow Wood Manor in Randolph.


The celebration began with a sip of champagne at a cocktail reception, where guests greeted friends old and new. Guests could bid on over 125 silent auction items, ranging from Disney tickets to a private in-home concert by local artist Mary Byrd. Dinner and dancing followed, with live music by the band Escapade, which includes the musical talent of Morris Habitat homeowner Robert Rosenberger.

The evening’s program began with special acknowledgement of the Home Sponsor, Schindler; the Premier Sponsor, Bayer; and the four sets of honorees – Sophie and Richard Palla, Jamie Rodgers, Valley Bank and the Town of Morristown. 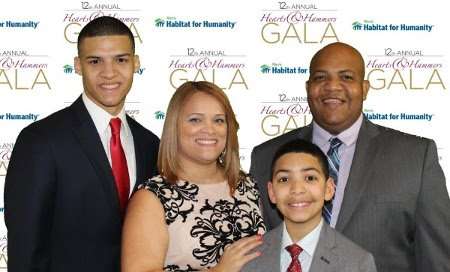 The most memorable moment was hearing the story of homeowner speaker Junior Rondon, pictured at right with his family. He grew up with a father and mother who both worked two jobs, but were barely able to afford the cramped apartment where he shared a room with his younger brother. Now he’s proud to have a room of his own in the Rondon’s new home on Carlton Street in Morris Township. Now a senior at Morristown High School, Junior plans to attend Fairleigh Dickinson University on a full scholarship. He ended his speech by saying, “And I want to thank all of you for my dad’s parking spot, Mom’s dishwasher and a safe place to play and grow for my little brother Justin.  And thanks from all of us for many more Thanksgiving dinners at our new Habitat home.”

Junior’s story can be viewed on Healthy Home Network TV.

We wish to thank all the supporters, attendees, and volunteers who made this year’s Gala one of the most successful.

THANK YOU TO OUR SPONSORS