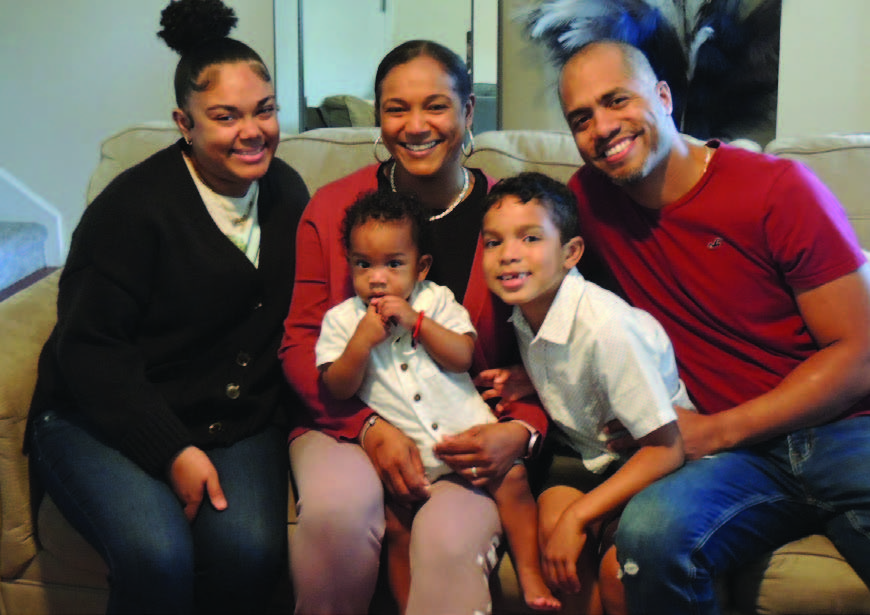 AT HOME WITH SILVIA AND MIRIDIO

You feel it the moment you cross the threshold in their new home – hope, joy, and love.

On a crisp fall afternoon, the three- bedroom home in Plainfield is bustling. A large stock pot of homemade Sancocho (a traditional meat and root vegetable stew) simmers on the stove while Silvia’s mother, Maria stirs. Estiany, their 17-year-old daughter, is taking turns caring for her 10-month-old brother. And outside Silvia and Miridio’s six-year-old son plays soccer in the yard.

FROM JIMANI TO NEW JERSEY

The story of Silvia, a home health aide and Miridio, a machine shop operator, begins in Jimani of the Independencia Province of the Dominican Republic.

Silvia and Miridio were childhood friends. At 16 Silvia left Jimani with her mom Maria to move in with family who had moved to Jersey City, NJ. On return trips to visit Jimani, Silvia reconnected with her friend Miridio, and he would visit her during his visits to NJ.

Silvia and Miridio soon fell in love and married. However, their happiness was short lived when they struggled to find an inexpensive apartment close to their jobs and family. What they could afford was located in a rough section of the city. Going out after dark, having a place for their newly expanding family to play was out of the question. To make matters worse, their downstairs neighbor could not tolerate any noise from the growing family that now included three children. The sound of their young son crawling or playing on the floor with toys or even dropping his bottle caused the neighbor to bang repeatedly on their door; sometimes using    a broom or mop to bang the ceiling from below. The neighbor, who went so far as dictating specific hours Silvia could clean her apartment, demanded they not have visitors or play music of any kind. She also occasionally called the police with noise complaints. Silvia and Miridio felt trapped in silence in their own apartment.

Imagine raising kids in this situation. All they wanted was to be a family, live their lives in peace and safety so their kids could be kids.

Miridio’s co-worker told him about Morris Habitat. He and Silvia met with the Morris Habitat’s Director of Family Services and learned of a homeownership opportunity for a three-bedroom home. We had a “good feeling this was our home, remembers Miridio.” The 3-bedroom home also had a fenced in back yard perfect for two active boys and a teenager.

“Thanks to God”, Miridio exclaimed when they were randomly selected to become homeowners for the duplex in Plainfield, the one with the fenced in back yard.

Estiany hopes to go to college and study criminal justice to work with the FBI. She is also considering joining the National Guard    to help pay for college. For now, she is settling in as a senior at Plainfield High School and making friends.

Her little brother is doing well in first grade and enjoys playing soccer with his friends. He now has his own room and a large bunk bed and a table where he can do his homework. His favorite class is music where he plays guitar, and he is learning to play the piano.

Silvia smiles broadly now and exudes sheer joy as she explains how grateful she and Miridio are for this new home. “We have freedom now for our kids. We have quiet and peace and are secure here.”

Miridio jokes he looks forward to buying a snow shovel because as a first-time homeowner shoveling the sidewalks and driveways is his responsibility now.

Your support gave Silvia and Miridio the gift of hope, stability and a brighter future. We  are appealing to you today to consider  this legacy for the next generations of families needing a safe, decent, and affordable place to call home.

Together, we are changing lives building homes, communities, and hope. Help us continue the legacy.

P.S. The demand for affordable housing is not going away. More than 2,000 families on our homeownership interest list have similar stories of hardship and challenges, and  they also need an  affordable  place  for their families. To help meet the need, we have 65 new homes planned in 2023. and we are working to help meet this challenge through our growing homebuilding, home repair, and neighborhood revitalization efforts.

Please give generously so more families in need get the hand up they deserve!