Six families moved into the 119 Main Street building during December 2019.

Julio Damelines and Adriana Obregon have 3 daughters ages 21, 11 and 9. Julio works as a truck driver for a concrete company and Adriana works part-time in maintenance.

Jonathan and Guia De La Torre have a 3-year-old son. Jonathan is an optical technician for a manufacturing company.

Mariell Guridy Baez works as an assembler for electrical components. Her 18-year-old daughter is a full-time student.

Nicole and Daniel Pope have 3 daughters under the age of 3. Daniel, a veteran who served in the United States Marine Corps, works as a technician fixing office equipment. Nicole was a teacher, but she is now staying at home to raise their 3 young girls.

Farina Salim‐Jones lives with her 14-year-old daughter. She works in a hospital film library.

Heather Seelinger works as a secretary in a high school. Her 19-year-old son is a student and a volunteer football coach.

Mahmoud and Noura Abdelghafar have a 4-year-old son. Mahmoud is an Emergency Room Technician for one hospital and a Diagnostic Technician at another hospital.

Erika Gonzalez has a 3-year-old son. She is a Sort Manager for a package shipping company.

Hashem Ibrahim and Hend Elshmay have 1 son and 1 daughter who are 17-year-old twins. Hashem is a Shift Leader for a retail store and an Uber driver.

Claribel Medina has a 21-year-old son. She is a Department Manager at a retail store.

Laris Mojica-Mateo works as a transition specialist advisor for Fa nearby university. She lives with her mother and her 22-year-old son, who is a full time student.

Madelyn Porte is a Front-end Customer Service Representative at a hospital and has a 1-year-old son. 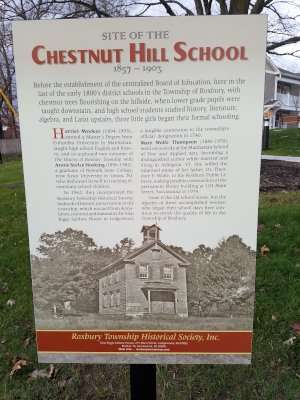 This project was built on the former Roxbury Township Department of Public Works site in Succasunna. Roxbury Township donated the property and committed $900,000 from its Affordable Housing Trust Fund to offset environmental cleanup costs and construction-related expenses. The building design for these two 6-plexes won the 2013 Award of Excellence from Community Builders & Remodelers Association of NJ for Best Affordable Mt. Laurel Home when it was first designed and constructed on Morris Avenue in Summit, NJ.

Site work started after the groundbreaking ceremony in October 2018. Wall panels were assembled at the Hammer for Heroes event in May 2019. Workers at Veterans Build Week in November 2019 put the finishing touches of painting, tiling and landscaping on the first 6-plex. The six homes in the 119 Main Street building were dedicated in December 2019 as the framing was started on the 121 Main Street building.

Women volunteered on the 121 Main Street building during Lowe’s Women Build Day in March 2020. The second 6-plex was dedicated in November 2020. A plaque on the property records the history of an early use of the hillside from 1857 to 1903 for the two-story Chestnut Hill School surrounded by chestnut trees.

Many thanks are due to the 3,190 volunteers who donated 24,028 hours to build 119 Main Street. Employees of Travelers donated 375 hours of volunteer service, along with many people from other civic, church, corporate and school groups. An additional 1,670 volunteers donated 13,360 hours to finish the final homes at 121 Main Street. Employees of J.M. Rodgers Co. volunteered the most hours of any organization. 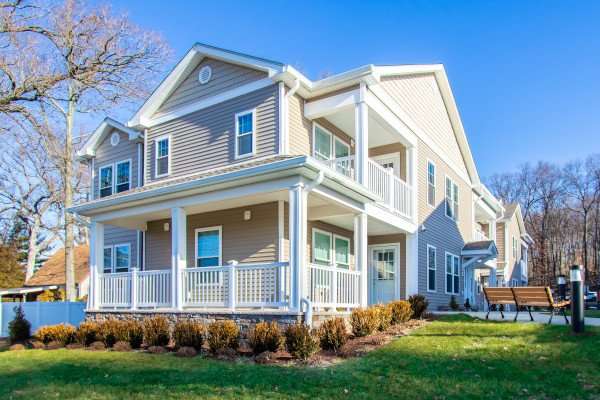 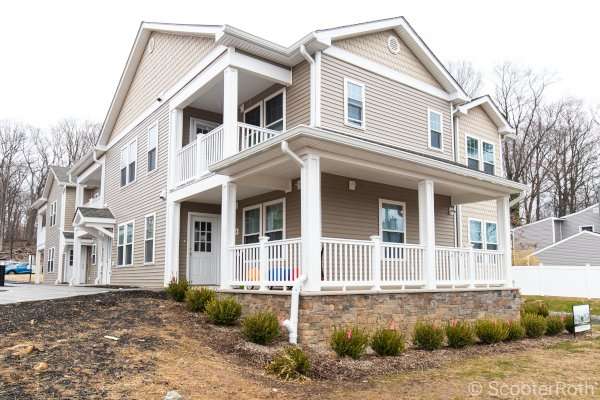